Dictation for Writers & You

Do you want to be able to dictate notes on the go? I’ve found that writers find some of the best solutions, and dictation apps and tools are no exception!

In several of my writing groups, dictating on-the-go has been bounced around and I wanted to share the top recommendations with you. So whether you find yourself stuck in the car, up to your elbows in bread flour, or simply a verbal processor who’d like an innovative way to journal, you can find the perfect dictation app to help you capture your thoughts.

Notes – Your Notes app has a dictate function that saves straight to any note you select and can be synced to your computer. This is great for easily exporting and making tweaks and corrections later.

Notes apps – Many android devices have a similar function within their notes apps as well. I have a Samsung phone and within my Samsung notes app, I have the ability to dictate notes. It is amazingly accurate and has the benefit of being able to sync with my computer, but it will stop recording if I pause too long.

This software is widely heralded as the world’s best speech recognition software and can be installed on your computer and phone. It trains to your voice for the most accurate experience. However, it is EXPENSIVE and the mobile version lacks the functionality of the desktop. Most users report that the best way to use the mobile version is to record a piece then export it to desktop for transcription, so this might be cumbersome for more on-the-go users.

If you are a fan of Evernote, check out their microphone feature. This allows you to record an audio note. While Evernote itself does not create transcripts of audio files, with iPhones you can create an easy transcription by using the microphone button instead of the record audio button when you create a new note.

When installed on both your desktop and smartphone, Google Keep is a handy little app that allows you to take audio notes on your phone and easily transfer them to Google Docs later. (Google Docs does not have a native voice function.) What I like about Google Keep is that it “keeps” not only the transcription of your note but the audio as well so you can actually hear what you meant later, making for easier edits.

Ah, the much-loved Word. Word’s dictate function is far from perfect, but it has a couple of things going for it. First, almost every writer I know owns Word. Second, it’s very easy to access. Simply click the little microphone and go for it. Buuuuttt…. pause too long and this quirky little thing will stop. And its accuracy leaves a little to be desired. It’s doable. But it can be annoying when all I wanted to do is close my eyes and speak.

This is an app I haven’t tried yet, but it’s been generating a lot of buzz in this Zoom-crazy world of ours. Not only can you use it for voice notes, but you can also use it collaboratively in Google Meet and Zoom. It has a live transcribe function and you get up to 600 minutes of transcription free a month. For non-fiction writers who need to be able to reference notes with interviewees, or anyone working collaboratively who doesn’t want to stick someone with secretary duty, this looks like a big game-changer. If anyone has tried this app, I’d love to hear about it as it looks awesome. 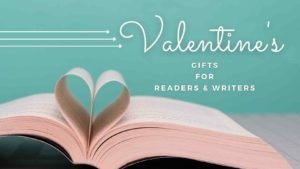 Valentine’s Gifts for Readers and Writers

Valentine’s Day. A time for hearts and touching gifts. And sheer panic when you have no idea what to get the reader or writer in

This post began as “Five Southern Books to Start the New Year With.” But the wonderful thing about Southern literature is the breadth of variety

Each week I send out advice on writing, creativity, and updates on my works in progress.